“We continue to execute on our Canadian-focused strategy to grow across the continuum of seniors care and services,” commented Tim Lukenda, President and CEO. “We are pleased with our progress in building AFFO through the strategic deployment of proceeds from the sale of our U.S. operations. We expect continued growth across all segments of our business as we integrate our recent acquisitions and build off the strong platform we have established. We are firmly focused on building shareholder value over the long term,” Lukenda added.

The following is a summary of selected financial information for the three months and years ended December 31, 2015 and 2014.

(2) Payout ratio is calculated using dividends declared per share divided by the basic AFFO per share for the respective periods.

Consolidated Adjusted EBITDA was relatively unchanged at $23.1 million this quarter compared to the 2014 fourth quarter, representing 8.5% and 10.8% of revenue, respectively. Excluding a $2.8 million reinsurance premium refund recognized in the 2014 fourth quarter, Adjusted EBITDA increased by approximately $2.9 million, reflecting growth in net operating income, partially offset by an increase in administrative and lease costs.

AFFO from continuing operations was $9.7 million in the 2015 fourth quarter compared to $10.6 million in the 2014 fourth quarter. However, excluding the reinsurance premium refund, AFFO from continuing operations increased by $1.8 million, reflecting an improvement in Adjusted EBITDA and lower net finance costs, partially offset by higher maintenance capex, and an increase in current income taxes.

Same-store net operating income from our Canadian operations improved by $2.7 million, primarily due to increased business volumes in our management services and group purchasing operations, and higher preferred accommodation revenue and enhanced funding in our Ontario long-term care operations, partially offset by cost increases in excess of government funding in our home health care operations. Net operating income from our U.S. operations improved by $4.0 million and included a $1.8 million positive effect of the weaker Canadian dollar, with the balance due to higher investment income of $2.6 million, partially offset by a decline in net operating income of $0.4 million from our health technology services.

AFFO from continuing operations increased by $10.2 million to $44.6 million in 2015, and excluding the impact of the reinsurance premium refund in 2014, improved by $13.0 million. This reflected the improvement in Adjusted EBITDA and lower net finance costs, partially offset by higher current income taxes and an increase in maintenance capex. Net finance costs included $3.6 million of interest income realized in 2015 in connection with deferred consideration from the disposed U.S. operations, and lower interest expense due to the redemption of convertible debentures in 2014.

Our expense for U.S. self-insured liabilities is included in discontinued operations, and totalled a net of $29.3 million (US$24.1 million) for the year 2015. All provisions were recorded in the period prior to the sale of our U.S. operations, and in the 2015 fourth quarter we reflected a release of reserves of $5.2 million (US$3.8 million). Claim payments in 2015 totalled $42.1 million (US$32.9 million).

As at December 31, 2015, Extendicare’s consolidated cash on hand totalled $103.6 million, of which $94.6 million was held by our Canadian operations, and $9.0 million was held by our continuing U.S. operations. Subsequent to year end, the Company acquired two retirement communities for approximately $40.5 million in cash, of which $2.0 million had been paid as a deposit at December 31, 2015. This is in addition to the four retirement communities acquired during the 2015 fourth quarter for approximately $98.6 million. The purchase price for each of these acquisitions was initially paid in cash with an intention to finance up to 65% as stabilized occupancy is achieved.

2015, was 3.7 times, and was 4.1 times after excluding the bridge loan finance costs of $2.2 million in connection with the acquisition of the home health care business in April 2015. Interest coverage is defined as Adjusted EBITDA divided by net interest, which represents interest expense net of interest revenue.

Extendicare’s financial statements, including its Management’s Discussion and Analysis are available on our website at www.extendicare.com under the “Our Investors/Financial Reports” section. Also, a supplemental information package containing historical quarterly financial results and operating statistics and a list of our senior care centres can be found on the website under the same section.

Extendicare is a leading provider of care and services for seniors throughout Canada. Through our network of 118 operated senior care centres (64 owned/54 managed), as well as our home health care operations, we are committed to delivering care throughout the health care continuum to meet the needs of a growing seniors’ population in Canada. Our qualified and highly trained workforce of 23,100 individuals is dedicated to helping people live better through a commitment to quality service and a passion for what we do.

Extendicare assesses and measures operating results and financial position based on performance measures referred to as “net operating income”, “NOI”, “NOI margin”, “Adjusted EBITDA”, “Adjusted EBITDA margin”, “AFFO”, “AFFO per share”, and “payout ratio”. These are not measures recognized under GAAP and do not have standardized meanings prescribed by GAAP. These non-GAAP measures are presented in this document because either: (i) management believes that they are a relevant measure of the ability of Extendicare to make cash distributions; or (ii) certain ongoing rights and obligations of Extendicare may be calculated using these measures. Such non-GAAP measures may differ from similar computations as reported by other issuers and, accordingly, may not be comparable to similarly titled measures as reported by such issuers. They are not intended to replace earnings (loss) from continuing operations, net earnings (loss), cash flow, or other measures of financial performance and liquidity reported in accordance with GAAP. Detailed descriptions of these terms can be found in the disclosure documents filed by Extendicare with the securities regulatory authorities, available at www.sedar.com and on Extendicare’s website at www.extendicare.com.

To Our Extendicare Community, continue

There has been good news to start the year with vaccines being administered to vulnerable populations across Canada. Extendicare continues to work with our public health partners across the country to administer first and second doses to help protect our communities. continue

Our staff have fought day-in and day-out against this devastating virus for a year. While it has been difficult, the vaccine gives hope that we are nearing a return to better times. continue

As we come to the end of month seven of the pandemic, our focus at Extendicare remains steadfast on providing the care and service that residents, clients, patients, team members and families rightfully expect. We are very grateful for the hard work, care and commitment our team has displayed to our residents, clients and patients. continue

Our Remarkable Moments view all 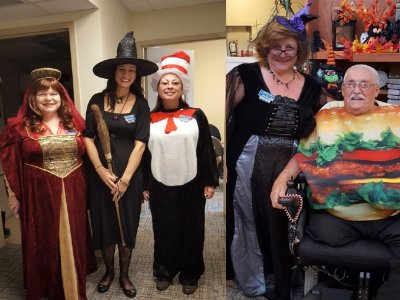 For Halloween Extendicare Maple View had a costume fashion show for residents, staff and family. continue 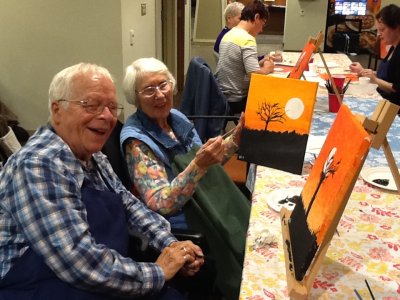 A great way to bring the community together. continue